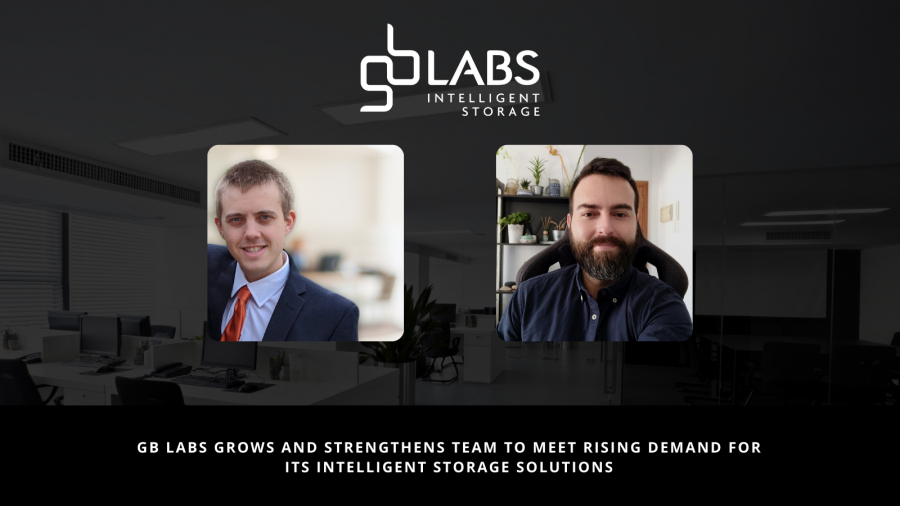 Aldermaston, UK, February 2022: GB Labs today announces that it has appointed Tom Sheldon to the role of Chief Product Officer (CPO) and David Martin Bautista to Head of Development. Both Sheldon and Martin Bautista have worked their way up through the company, having started out as part of the development team. To meet demand for its intelligent storage solutions,GB Labs has also expanded the number of support staff, and grown its development and production teams, resulting in 20% growth personnel.

“I am delighted that Tom and David are taking on these new leadership roles within the company and playing an active part in taking GB Labs through the next phase of our growth and evolution,” commented Dominic Harland, CEO and CTO, GB Labs. “I’m extremely proud of the way we have brought both of them up through the ranks and seen them grow in parallel with our company. I know that they will play a key role in bringing our vision for the future to fruition.”

Tom Sheldon has been with GB Labs since November 2010, progressing quickly to head of development, reporting directly to CEO and CTO Dominic Harland. He was responsible for growing the department and driving backend development. As CPO he will be based at GB Labs’ Aldermaston HQ, taking a lead in the company’s product strategy and drive product development. Sheldon will also play an active role in maintaining strong synergy between the development and R&D teams and ensuring the GB Labs product roadmap is commercially solid.

GB Labs Chief Product Officer Tom Sheldon said, “At GB Labs we are passionate about continuously improving functionality and listening to customers to ensure that our products deliver what they need, while keeping the user experience as straightforward as we can. I am delighted to take on this new role and help drive our product roadmap in a direction that remains tightly aligned with our customers’ businesses.”

David Martin Bautista joined GB Labs in February 2013 as a developer, taking on responsibility as lead frontend developer as GB Labs grew. As Head of Development, he will be responsible for managing the in-house development team, driving software updates and future innovation – including the UI. Martin Bautista will also act as a link between the development and support teams to ensure seamless communication between the two.

“When I started with GB Labs, the company appealed to me because it offered opportunities for growth and the chance to work with interesting technology. That remains true to this day,” said David Martin Bautista, head of Development at GB Labs. “I have grown with the company, and I believe we are only just getting started; I’m excited to see where we go from here.”