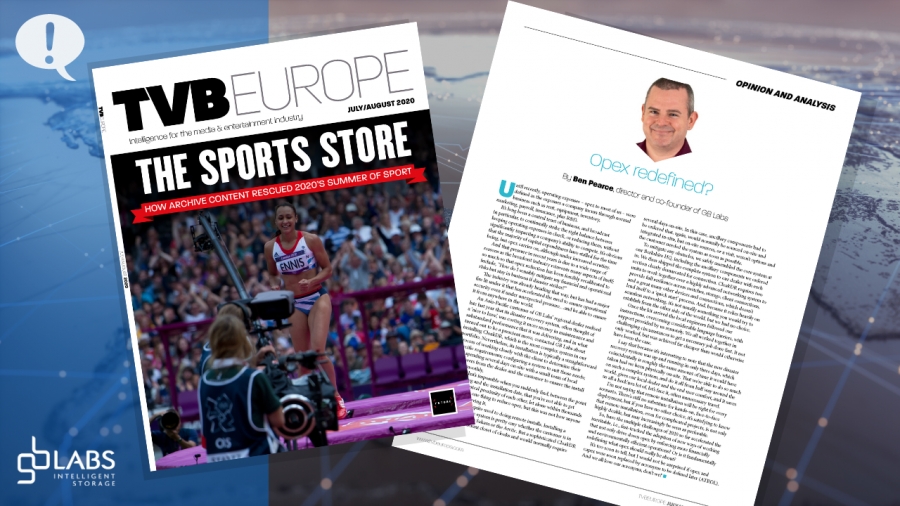 CBO Asia and Co-Founder, Ben Pearce talks to TVBEurope about how the industry is evolving and its knock on affects on opex.

Until recently, operating expenses – opex to most of us – were defined as the expenses a company incurs through normal business such as rent, equipment, inventory, marketing, payroll, insurance, plus R&D.

It’s long been a central tenet of business, and broadcast in particular, to continually strike the right balance between keeping operating expenses in check, or reducing them, without significantly impacting a company’s ability to compete. It’s obvious that the majority of capital expenditures have stalled for the time being, but opex carries on, although under increased scrutiny.

And that pressure in recent years is due to a wide range of reasons as the broadcast industry reinvents many aspects of itself; so much so that opex reduction has been forcibly recalibrated to include, “How do I sensibly mitigate my financial and operational risks but stay in business if disaster strikes?”

The industry was already heading that way, but has had a major fire lit under it that has accelerated the need to ensure operational security even if under unexpected pressure…and be able to ensure it from anywhere in the world.

An Asia-Pacific customer of GB Labs’ regional dealer realised late last year that its disaster recovery system, often thought of a ‘nice to have’, was costing it more money in maintenance and substandard performance that it was delivering, and in what turned out to be a prescient move, contacted GB Labs about installing Cloak DR, which is the most complex system in our portfolio. Nevertheless, its installation is typically a straightforward process of working closely with the client to determine their specific requirements; configuring a system to suit those needs; and spending several days on-site with a small team of local engineers from the dealer and the customer to ensure the install goes smoothly.

But that’s impossible when you suddenly find, between the point of ordering and the installation date, that you’re not able to get within physical proximity of each other, let alone within thousands of miles. It’s one thing to reduce opex, but this was not how anyone foresaw achieving it.

GB Labs is quite used to doing remote installs. Installing a standard storage system is pretty easy whether the customer is in the middle of the Sahara or the Arctic. But a sophisticated Cloak DR system is a different closet of cloaks and would normally require several days on-site. In this case, ancillary components had to be ordered that, again, would normally be sourced on-site and integrated in-situ, but on-site sources, or a visit, weren’t options and the customer needed the system as soon as possible.

To mitigate any obstacles, we safely assembled the core system at our Berkshire HQ, including the ancillary components we ordered in. We then shipped the complete system to our dealer with each section clearly demarcated for connection. Cloak DR requires two units to work together over a highly advanced networking system to provide full resilience across switches, storage, client connections, and a great many other devices and connections, which doesn’t lend itself to a ‘quick start’ process. And, because it relies heavily on seamless networking, it’s not usually something you would try to establish from the other side of the world, but we had no choice.

Once the kit arrived the local engineers followed our instructions, overcoming considerable language barriers, with support provided by us remotely. We all worked together in challenging circumstances to get a necessary job done fast. It not only worked, but was achieved far cheaper than would otherwise have been the case.

I say that because it’s interesting to note that the new disaster recovery system was up and running in only three days, which coincidentally is roughly the same amount of time it would have taken had we been physically on-site. That we’re able to do so much on such a complex system, and do it all from half way around the world, gives our local dealer and the end user comfort, and it saves us all a heck’uva lot of, let’s face it, often unnecessary travel.

So, have the multiple challenges of 2020 so far accelerated the inevitable, i.e., fast-tracked the adoption of new ways of working that not only drive down opex by enforcing more financially and environmentally efficient operations? Or is it fundamentally redefining what opex should really be about?

It’s too soon to tell, but I would not be surprised if opex and capex were soon replaced by acronyms to be defined later (ATBDL). And we all love our acronyms, don’t we?