Located in the heart of the business community of Orange County, CA, the ninth largest economy in the world, the Merage School cultivates relationships with large and multi-national organisations and provides innovative education based on cutting edge research.

The recent completion of the school's state-of-the-art, 78,000-square-foot Charles Schwab Trading and Technology faciilty- mimics a live securities-trading floor with real-world tools and technology such as interactive trade stations, including TV monitors that stream global finacial news and tickertape.

These facilities enable students to learn how to best serve their future clients by integrating technology and best practice workflows, all of which require data acquisition, storage, and rapid retrieval for educational and academic productions being created from a number of edit suites.

University officials and faculty members soon became aware that their existing storage system used for film editing on - at the time, five edit station - was woefully inadequate additional speeed performance, particularly in light of the accelerating move to 4K production.

The Merage School knew that those rapidly growing demands on the existing storage system meant that they had to find a new, collaborative solution. One that could not only provide the performance and capacity they required, but could handle multiple types of workflow.

As well as be readily expandable, the system would need to grow with the ongoing requirements of training pupils in the media editing and production process, plus many other real-world media and data usage applications for years to come.

This is important because, for example, the majority of the rapidly growing amount of 4K content being ingested is arriving from smart phones and drones rather than video cameras. With that kind of portability and popularity, it was easy ot see a massive traffic jam for the existing system looming straight ahead.

Following consultation with GB Lab's Hollywood-based solution provider, RFX Inc, the school opted for GB Labs' FastNAS F-16 Nitro, which would upgrade their performance from their existing 1Gb to 10Gb for existing users; and by utlising a 16-port 10Gb Smart Managed Switch, would easily enable the shool to bring more edit stations online.

That would track with the anticipated growth of respective business school department's need to record and repurpose lectures, symposiums, training videos and similar high-value content.

It's no secret that many prodcution companies, for example, opt for single-drive systems becuase they are relatively cheap and cheerful, only to soon discover that it's a false economy and they simply can't cope with the demands placed on them.

The FastNAS F-16 Nitro, on the other hand, is a new concept in shared storage that isn't built soley for high end post-production and broadcast facilities. It is an ideal, and highly affordable, storage platform for any organisation that needs a high performance NAS with the added benefit of a unique hybrid disk technology powered by GB Labs' CORE.4 OS Lite.

FastNAS F-16 Nitro's blistering performance is thanks in part to GB Labs' revolutionary Nitro hybrid boost NVMe technology and proprietary Velocity RAID Engine, which together provide up to 3000MB/s throughput. Nitro delivers dramatic improvements to collaborative media workflows with a very near to pure SSD experience, but as far less cost.

Moreover, the inclusion of GB Labs' new Mosiac automatic asset organiser was highly attractive to those at the school who were evaluating GB Labs' offering, and soon sealed the deal.

Mosiac is an industry-first combination of AI and intelligent storage that is vastly enriched way to automatically track, organise, and find media assets. Mosiac does that by scouring all in-built metadata and integrating it with a professional AI tagging system, therefore eliminating wasteful manual tagging. Mosaic's content search results are much closer match to the search terms, which saves substantial amounts of time and money.

According to Geraint Bell, a multimedia producer in the school's Digital Learning Department, "GB Labs gave us the best value for the type of system we were looking for, with an equally sound solution for expansion. The GB Labs FastNAS F-16 Nitro has provided the capacity, speed and expansion options we were lookingfor, and did it all within our budget."

"In the time we have had it, FastNAS F-16 Nitro has proven to be very reliable; and the transfer speed has helped streamline our post production workflow as well as enable multiple editors to collaborate on the same project."

Nitro is especially advantageous for the business school becase it serves as their non-volatile memory express (NVMe) layer, which, because it is so fast, enables them to not only do multiple streams of 4K, but buffer any complicated workflows that might- and often do - get thrown into the workflow mix. That additional performance boost provides yet another level of comfort for stable adn secure storage and data management growth that is much advanced over spinning disks. This is all due to a GB Labs performance algorithum that is unique in the industry.

Additionally, what The Paul Merage School of Business did not expect, is that they wouldn't have to endure the disruption of transitioning from their old system to the new one. They could in fact keep the existing system and continue using it on a near-line basis while the new FastNAS F-16 Nitro system was installed and commissioned. Both systems run alongside each other today.

The ability to dynamically expand its FastNAS storage system without first having to offload data proved to be so useful that the school soon doubled its capacity by investing in FastNAS F-16 Nitro EX, as an easy and cost effective expansion option that enables the school to expand storage while keeping existing data safe, secure, and in place.

The ability of FastNAS F-16 Nitro and Mosaic operating on the CORE.4 OS Lite to help leverage what was already in use is a huge advantage. GB Labs is the only company that provides organisations like UCI's Paul Merage School of Business wiht the tools and technologies that can migrate its existing server system to work with its new one, therby continuing to make the most of past and present investments. 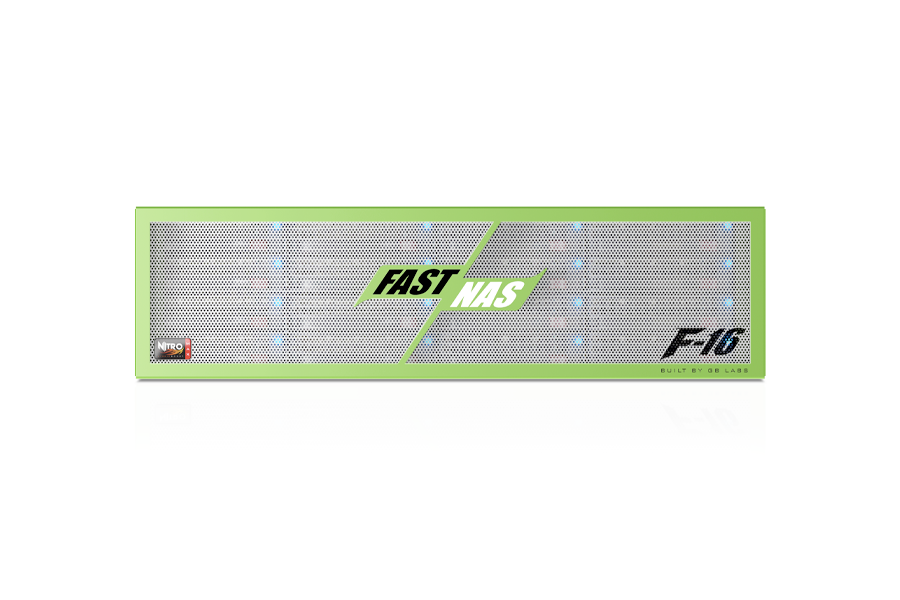 GB Labs gave us the best value for the type of system we were looking for, with an equally sound solution for expansion.

The GB Labs FastNAS F-16 Nitro has provided the capacity, speed and expansion options we were looking for, and did it all within our budget.

In the time we have had it, FastNAS F-16 Nitro has proven to be very reliable; and the transfer speed has helped streamline our post production workflow as well as enable multiple editors to collaborate on the same project.